Koh Ha is a tiny group of islands not far from Koh Lanta on Thailand’s south west coast. The tall rocky limestone karst islands are very picturesque, like many of the islands in this part of the world, similar to Koh Phi Phi and the so-called James Bond island in Phang Nga. But the real beauty of these islands is to be found underwater.

The diving here is special. So special in fact, that the Thai Royal family has the group of islands closed for a few weeks each year so they can have exclusive access to it.

Underwater the landscape is as stunning as it is above, with large boulders and rocky reefs, all with a thick covering of colourful soft corals as well as a number of caverns and swim-throughs to explore.

All manner of reef fish, such as damsels, butterfly fish and coral trout flit about the soft coral, several species of anemone fish hover over the many anemones, while schools of snapper, fusiliers, jacks and barracuda swarm in the blue. In the crevices and caverns, giant moray eels, puffer fish and the odd giant groper hide.

In the Thai language ‘Ha’ means ‘five’, and in this tiny little archipelago there are five islands, with most islands – and dive sites – having numbers for names, with a few exceptions which are named after specific features, such as ‘The Chimney’ and ‘Twin Cathedrals’.

The most popular dive site here is Twin Cathedrals, named for its two enormous caverns. Descend next to the largest island and swim along the wall towards a couple of enormous boulders, worth exploring before entering the first cavern.

Past the boulders there is a sloping reef, covered in a forest of whip corals descending about 25m which looks like something Dr Suess would have dreamed up. Above this reef you’ll see the enormous entrance to the first cavern where you can ascend to an air bubble to that extends another 50m above water. 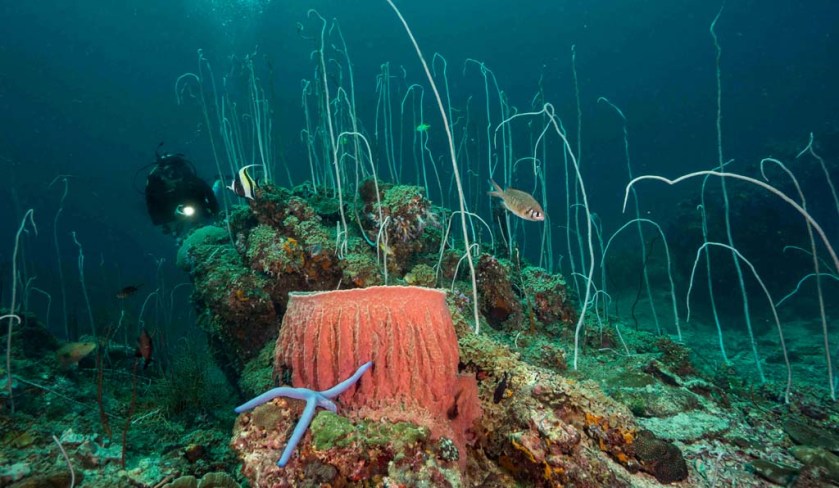 Dive under islands No. 2 and No. 4 to find more rocky reefs and large boulders covered in brightly coloured hard and soft corals, as well as large sea fans, with schools of fuseliers and snapper flying over them, while damsels, butterflies and anthias dart in and around the coral formations.

The Chimney, is so-named for its entry point – a chimney which you descend at the start of the dive down to around 20m before it opens into a small cavern, lined with soft coral and full of curious big eyes. Outside the cavern is a large bowl, protected on all sides by large boulders, with smaller boulders forming a large garden of anemones which we spend lots of time exploring before heading into the shallow coral gardens.

Each dive is as stunning as the next – you’ll quickly see why the Royals love it so much.